People who like Intel Atom which provides us the maximum portability on netbook. Even I have those Intel Atom, but what’s make me cry is about its lack of power in decoding H.264.

Yup, although I’m a fan of AMD chips but on that time Intel amused me on their tech on the smallest processor that they build specific for netbook. So the first netbook released with Intel Atom that I can see is the Acer Aspire One (AAO).

Yup, its light, mobile, and battery last longer than normal notebooks does. But I repeat again, they lack more on performance. It can’t do playback 1080p either streaming on Youtube, or media file.

No whining around here, what been bought have been bought. I can’t change the fact. So, I use my AAO normally for browsing the net on the go.

That’s turn out great until I saw this video…

I actually can’t believe what I’ve seen with my eyes at the last part. Single core?? With no Hyperthreading-like technology that Intel use in their Atom chips. Able to play 1080p video?

This beats my AAO which using Intel Atom N270 Single-core [1 Physical Core (Each core have 2 thread beause of Hyperthreading) = 2 Threads = 2 Threads. My AAO can't even play a 1080p video. Jitters and the video out of sync with the audio.

Even the Intel Atom N550 Dual-Core did have problem to start up the 1080p video. Wait, Single-core beats up Dual-core processor? Sure this is wierd. We thought more cores delivers more power right? But today is unexplainable.

I'll provide the data for those 3 specs that they use... 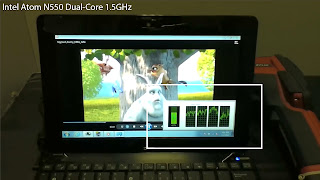 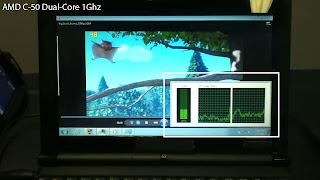 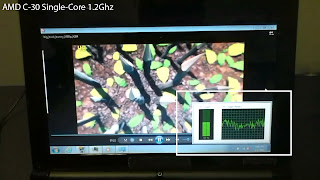 As normal, more cores or thread delivers more power right? But how can we explain it when we saw this thing? Both AMD and Intel chips are using same technology that is CPU+GPU on a single chip.

This what makes me cry and think why Intel can’t deliver this to user?

Some notes from Admin


lol fb graph-v1 doesn't work in 2020. that tells ya how long this website have online without update.